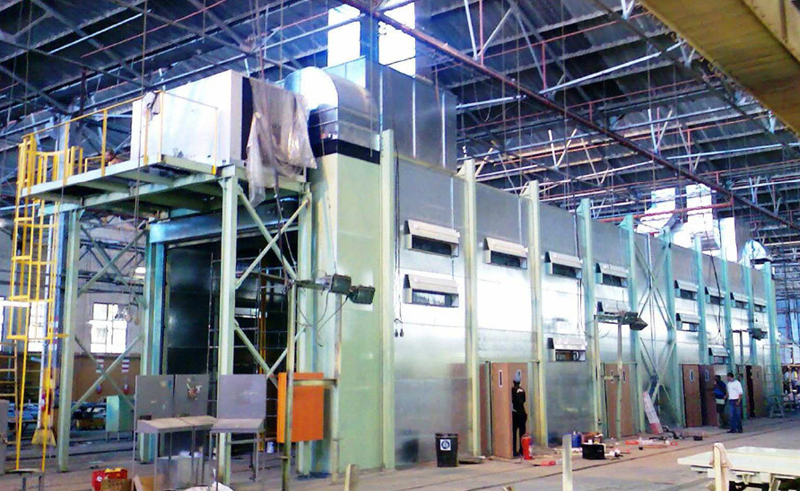 
Recycling: Given the volatile nature of the paint fumes, no recycling was possible as is the norm with standard air conditioning. We did however equip the booth with additional coils in the discharge ducts in order to recover and reuse the cold or warm air after the overspray had been filtered.

Dust control: The design is a positive pressure system in that fresh air that has been filtered and cooled/heated is introduced into the booth at the same rate as the air that’s being extracted. The fan plenums have limit switches on the access doors which automatically cut the power to the fan in the event of a door being opened, thereby controlling the ingress of dust laden unfiltered air that could by-pass the filters.

The benefit: Being a positive pressure booth, any of the eight staff access/emergency doors can be opened without any drafts and dust from entering the booth.

Safety: Given the unstable nature of the fumes used in the spray booth, C1D1 rated extract fans were used. For additional safety, a deluge sprinkler system was installed that can be automatically activated by a trigger tube located in the roof space or manually by any of the two painters working inside the booth. The doors are also fitted with door closers and warning lights to indicate when a door is left in the open position.

Process: The extracted air is initially filtered via a set of metal baffle plates. These baffles reduce the load of overspray on the filter media, prolonging the intervals between filter changes. The baffles also force the air to flow evenly through the interior of the booth and over the filter media. The supply and extraction ducts are fitted with fire dampers that are automatically or manually activated by either fusable links or an electronic motor, the latter of which is connected to a temperature probe located in the duct.

Lighting: In order for the painters to achieve a world-class finish in their work, lights are fitted to the sidewalls and roof of the booth to ensure optimum lighting conditions. The lights are accessed from outside the booth so that bulbs can easily be replaced while the booth is in operation. A percentage of the lights are fitted with emergency batteries to provide illumination should a power failure occur.

Ease of use: The booth is large enough to contain two painters, each of whom has a man carrier, located on the length. This carrier means that the workers have unrestricted access to any part of the coach. The carrier’s electric motors and controls are intrinsically safe for use in the volatile environment.

The benefit: A project that typically requires a staff complement of 6 – 8 workers with frequent stoppages can now be executed with 2 – 4 workers and minimal stoppages. The need for restrictive scaffolding or walkways (that require time to erect and dismantle) within the booth is now also eliminated thanks to the carrier system.